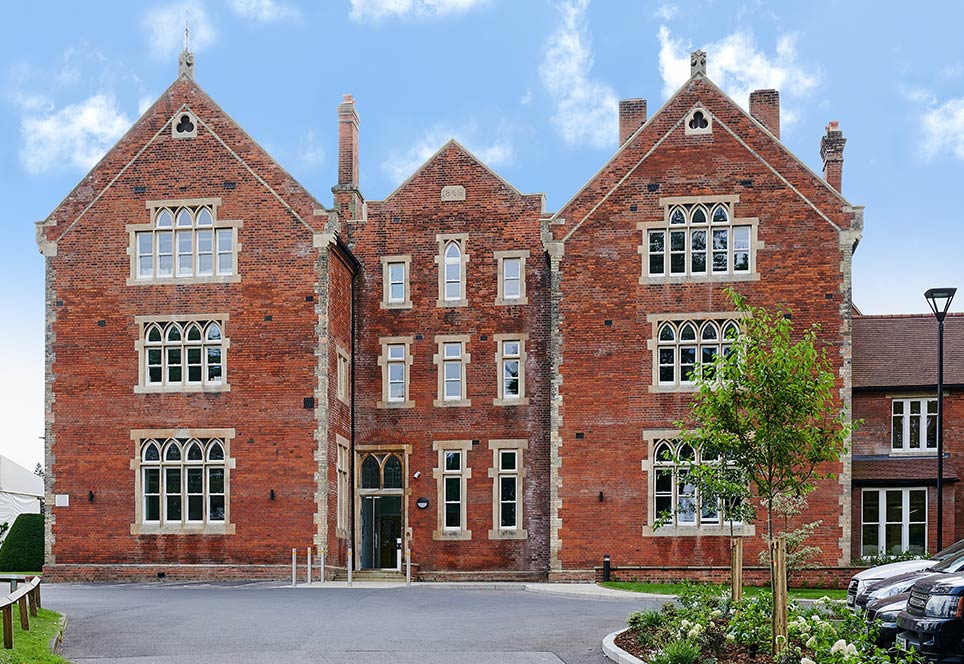 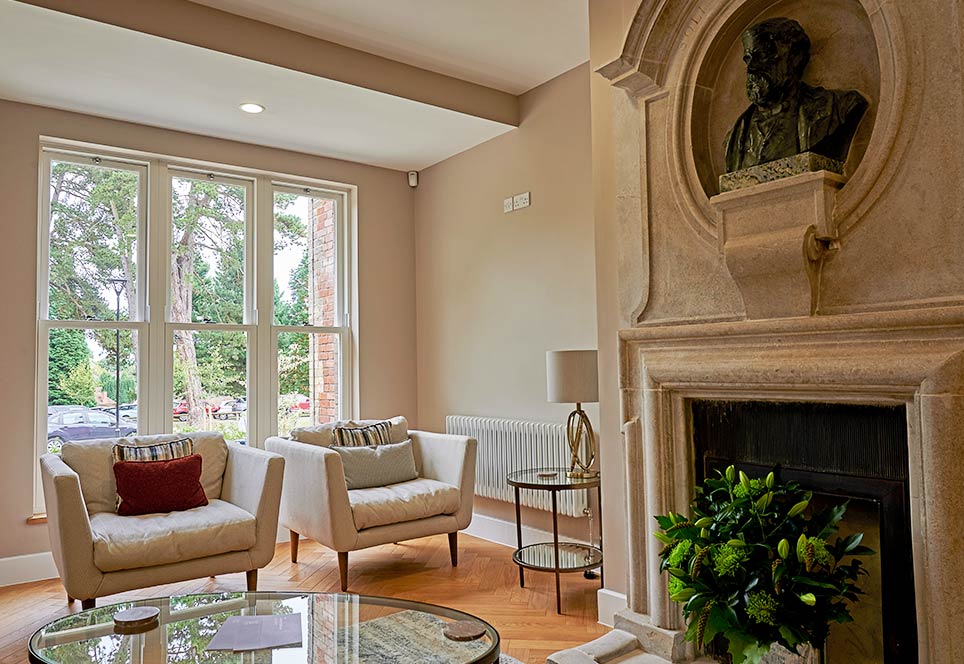 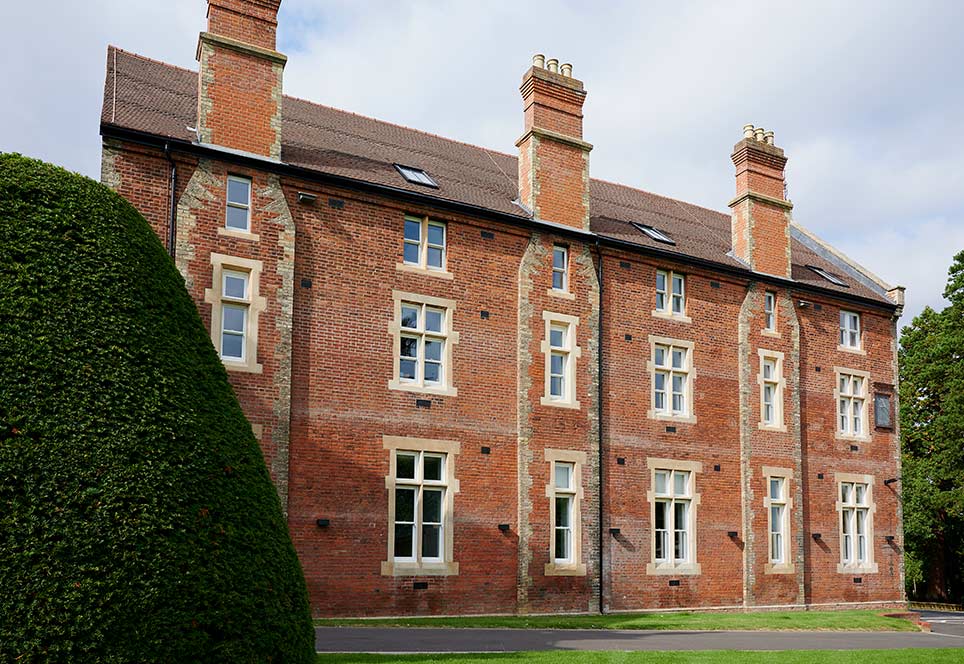 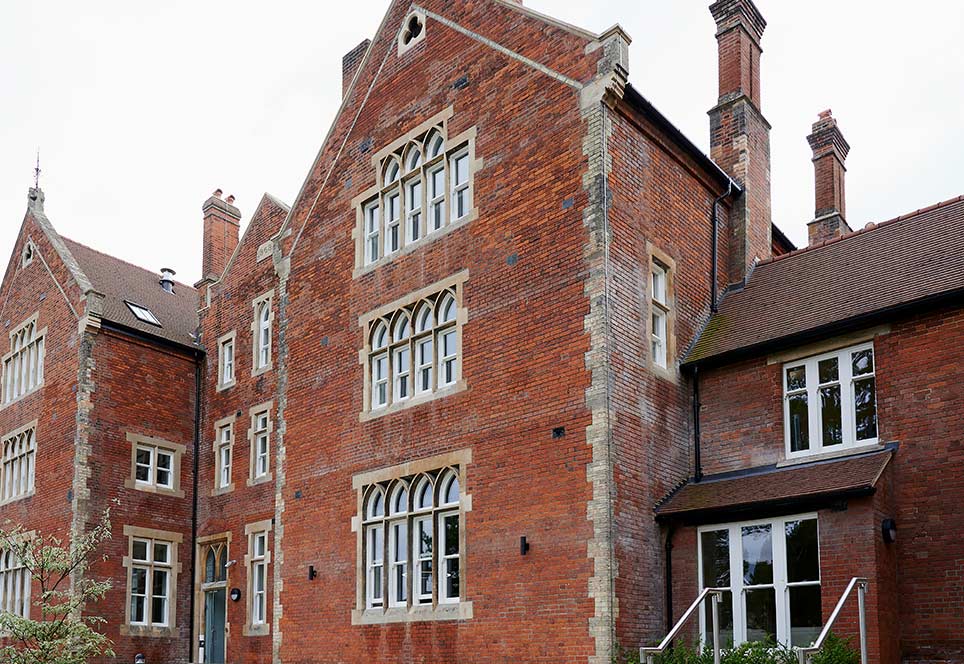 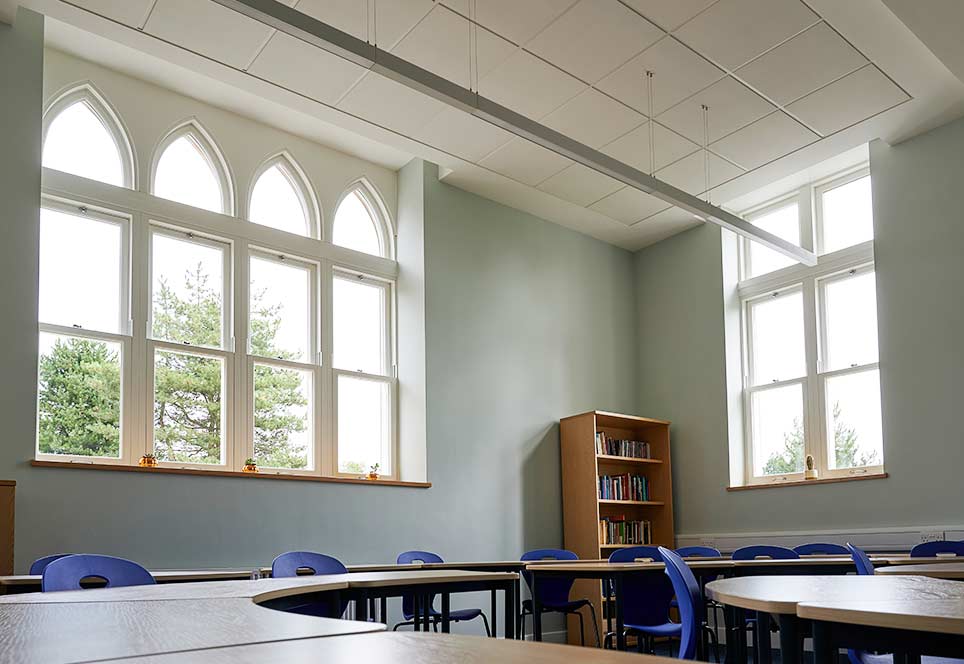 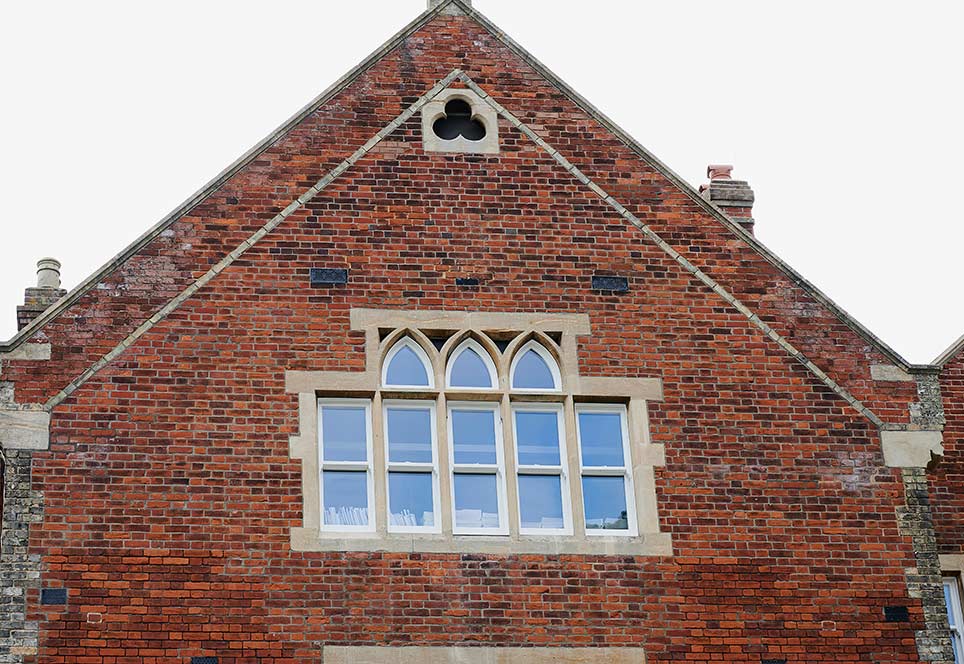 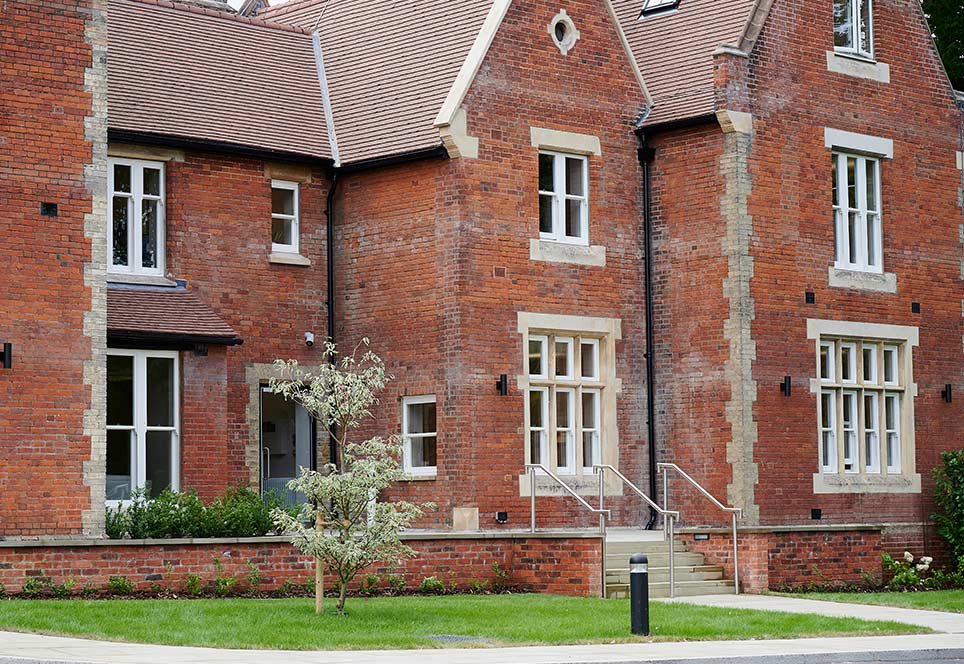 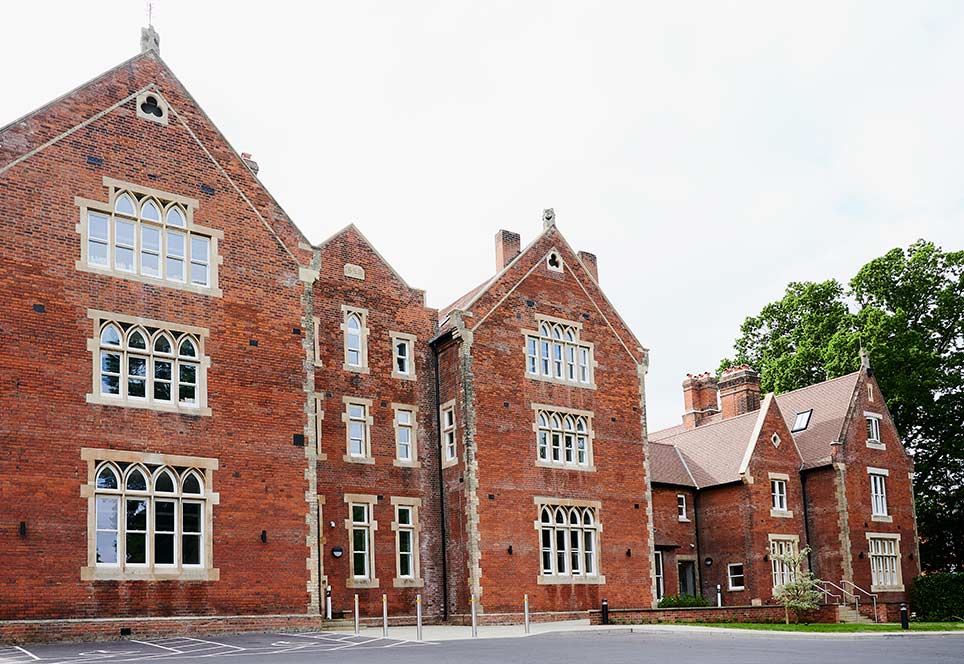 Bishop’s Stortford College was founded in 1868 by a group of prominent Nonconformists (that is those belonging to protestant churches independent of the Church of England) in East Anglia who wanted to establish a public school “in which Evangelical Nonconformists might secure for their boys, an effective and Christian education on terms that should not be beyond the reach of the middle class generally”.
The school’s first headmaster was the Reverend Richard Alliott and its first pupils were 40 in number. Rev Alliott led the school for 31 years and a bust of his image now prominently features in the entrance of the newly refurbished School House, pictured.
The original school buildings comprised just the “School House” and was used for everything including teaching, eating and sleeping as it was also a boarding house.
Additional buildings were built around the campus over the years but School House was still used for Dining and boarding for Boys until the opening of the dining hall in 1962.
Up until 2017 School House was a Boys boarding House (no classrooms included) and also a boys Day House, Collett House, was located on the Ground floor.
The building was then identified for refurbishment and during the period between 2018 and 2021 has seen a remarkable transformation retaining all the character of the 19th Century building with the use of modern materials to preserve the life of the impressive structure.

Challenges of the project

Asset Fineline were invited to propose the best solutions for the fenestration requirements for School House at Bishops Stortford College by consultants Pelling LLP in October 2018 after Roseview Windows had been nominated as the preferred product manufacturers.
PVC-u was not an obvious material suitable for such an historic building, but the benefits of improved thermal performance and its maintenance free properties counted when the variables were being considered.
Drawings and specifications were developed, combined with colour and choices of finishes which provided support to the planning application made on behalf of the college to ensure the planning authorities were satisfied.
Budget costs were then developed to enable the construction companies who were tendering the full refurbishment of the building to include an accurate sum for the windows within their overall tender price.
The challenges faced when replacing windows in such an old building are many, particularly when the fact that most, if not all of the existing stone window verticals were not vertical at all and were out as much as 10cms from top to bottom. Whilst the new frames would be exactly vertical and therefore highlight the differences between the two when installed, also the challenge that much of the existing stone work was cracked and damaged and being held in place by the old window frames.
To overcome and to fully understand all the challenges, it was agreed to install a series of pilot installations so that the integrity of the existing stone work could be established, ways to solve the requirement for achieving the arched heads which follow a specific radius and how frames which are 90mm deep were to replace those slimmer steel ones coming out.
Working closely with and successfully with main contractor Lengard, Asset Fineline developed a series of solutions including the taking of 23 location specific Gothic templates, carefully labelled with the survey because no window was the same and exactly matched the aperture for which it was intended.
When the frames had been fabricated at the Roseview factory, they were transported to site against the agreed installation programme, and called off in phases. The challenge of installation came into focus with the requirement to navigate around this 3 storey building without any internal staircases and the necessity to transport heavy frames up the outside of the building in accordance with health and safety protocols, requiring sashes to be removed in order to reduce the weight of some of these considerable windows.
The pilot installation was completed in January 2020 with the main works from September through to December and a total of 37 days installing on site throughout that period. All culminating in a complementary look of modern PVC-u technology within this 19th century building and part of a magnificent overhaul to bring the building back to life for the college and its students.

This was a challenging project with over 200 visually sensitive windows. Not only did the windows have to match the historic significance of the building, there was a large number of Gothic arches and multi-segment designs that had to work within the complex stonework. By working closely with the team at Asset Fineline we were able to build windows, manufactured from Rehau Heritage profiles, that were visually identical to the originals they replaced and less problematic to install”

Key deliverables for the project: 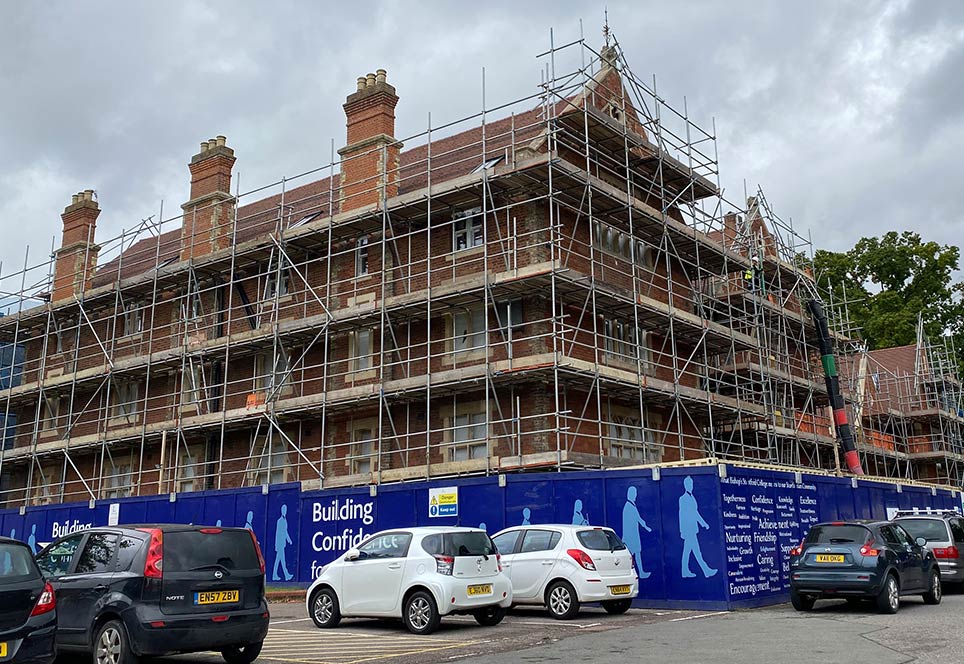 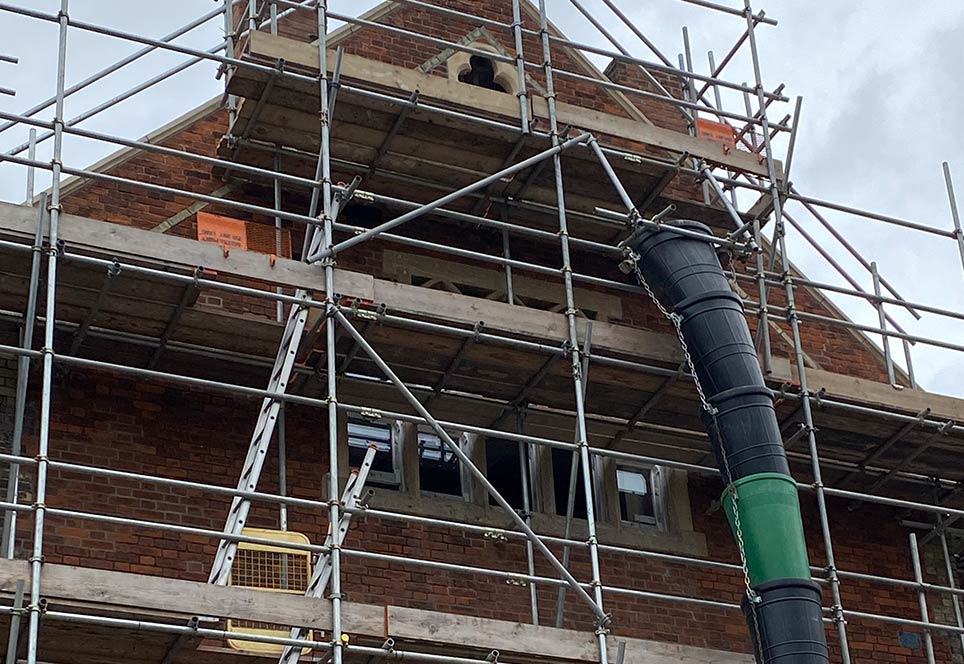 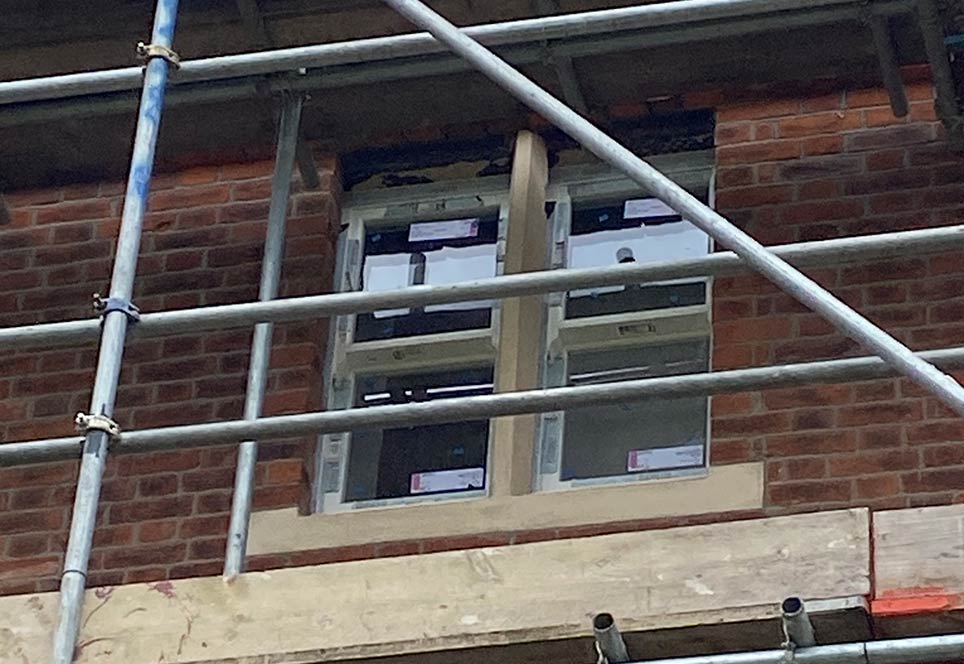 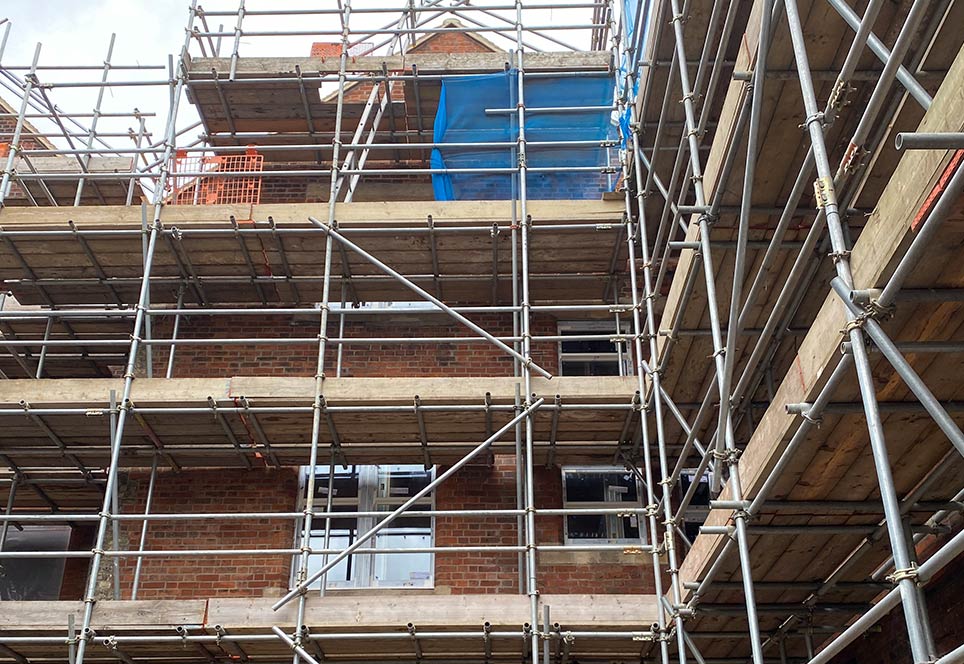 “The refurbishment of school house has transformed the building into an environment which the college is very proud of and is loved by staff and students alike.
We are grateful to both Lengard and Asset Fineline for the role they played in returning the building to its former glory and the care, attention to detail and excellent workmanship has meant that we now have a facility which meets all the standards we set ourselves.
Whilst the new windows retain the visual character of the building they offer all the benefits of using modern materials including low maintenance, improved insulation, security and light transmission.
We are very pleased with the results”

“Lengard were pleased to work with Asset Fineline on this prestigious project to ensure that the programme for the installation of the new frames met with the timescales required for the overall refurbishment of the building.

Close co-operation was necessary from both companies to ensure that frames were correctly installed into prepared openings which ensured the aesthetic requirements were achieved and that the installation was possible alongside the work being undertaken by other trades at the same time.

We were very pleased with the outcome which underlined that a successful and productive relationship was achieved on site by all.”

Your browser is out of date. It has security vulnerabilities and may not display all features on this site and other sites.

By continuing to use the site, you agree to the use of cookies. more information